NAS vs SAN doesn’t tell the whole story in comparing these two popular storage architectures. NAS vs SAN are as complementary as they are competitive and fill different needs and usage cases in the organization. Many larger organizations own both.

However, enterprise IT budgets are not infinite, and organizations need to optimize their storage expenditures to suit their priority requirements. This article will help you do that by defining NAS vs SAN, calling out their distinctions, and presenting usage cases for both architectures.

Both network-attached storage (NAS) and storage area network (SAN) were developed to solve the problem of making stored data available to a lot of users at once. Each of them provides dedicated storage for a group of users, but they couldn’t be more different in their approach to achieving their mission.

A NAS is a single storage device that serves files over Ethernet and is relatively inexpensive and easy to set up, while a SAN is a tightly coupled network of multiple devices that work with block-based data and is more expensive and complex to set up and manage. From a user perspective, the biggest difference between NAS vs SAN is that NAS devices look like volumes on a file server and use protocols like NFS and SMB/CIFS, while SAN-connected disks appear to the user as local drives. 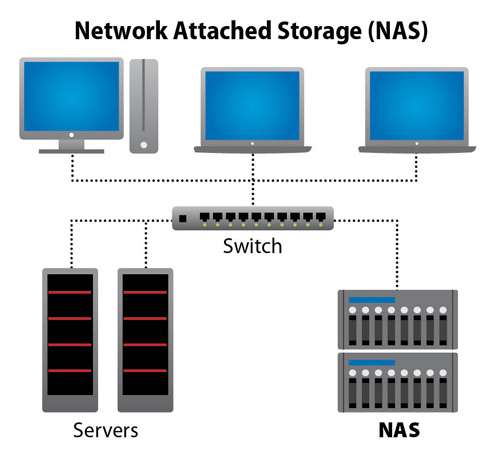 A NAS is a computer connected to a network that provides file-based data storage services to other devices on the network. The primary strength of NAS is how simple it is to set up and deploy. NAS volumes appear to the user as network mounted volume. The files to be served are typically contained on one or more storage drives, often arranged into logical, redundant storage containers or RAID. The device itself is a network node, much like computers and other TCP/IP devices, all of which maintain their own IP address and can effectively communicate with other networked devices. Although a NAS is usually not designed to be a general-purpose server, NAS vendors and third parties are increasingly offering other software to provide server-like functionality on a NAS.

NAS devices offer an easy way for multiple users in diverse locations to access data, which is valuable when uses are collaborating on projects or sharing information. NAS provides good access controls and security to support collaboration, while also enabling someone who is not an IT professional to administer and manage access to the data. It also offers good fundamental data security through the use of redundant data structures — often RAID — and automatic backup services to local devices and to the cloud.

The weaknesses of a NAS are related to scale and performance. As more users need access, the server might not be able to keep up and could require the addition of more server horsepower. The other weakness is related to the nature of Ethernet itself. By design, Ethernet transfers data from one place to another via packets, dividing the source into a number of segments and sending them along to their destination. Any of those packets could be delayed, or sent out of order, and might not be available to the user until all of the packets arrive and are put back in order.

Any latency (slow or retried connections) is usually not noticed by users for small files, but can be a major problem in demanding environments such as video production, where files are extremely large and latency of more than a few milliseconds can disrupt production steps such as rendering. 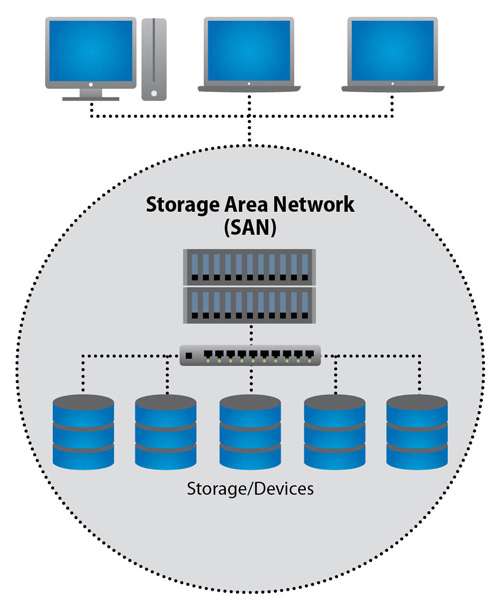 Servers connect to the SAN fabric using host bus adapters (HBAs). Servers identify the SAN as locally attached storage, so multiple servers can share a storage pool. SANs are not dependent on the LAN and relieves pressure on the local network by offloading data directly from attached servers.

A SAN is a way to provide users shared access to consolidated, block level data storage, even allowing multiple clients to access files at the same time with very high performance. A SAN enhances the accessibility of storage devices such as disk arrays and tape libraries by making them appear to users as if they were external hard drives on their local system. By providing a separate storage-based network for block data access over high-speed Fibre Channel, and avoiding the limitations of TCP/IP protocols and local area network congestion, a SAN provides the highest access speed available for media and mission critical stored data.

Because it’s considerably more complex and expensive than NAS, SAN is typically used by large corporations and requires administration by an IT staff. For some applications, such as video editing, it’s especially desirable due to its high speed and low latency. Video editing requires fair and prioritized bandwidth usage across the network, which is an advantage of SAN.

A primary strength of a SAN is that all of the file access negotiation happens over Ethernet while the files are served via extremely high speed Fibre Channel, which translates to very snappy performance on the client workstations, even for very large files. For this reason SAN is widely used today in collaborative video editing environments.

The challenge of SAN can be summed up in its cost and administration requirements — having to dedicate and maintain both a separate Ethernet network for metadata file requests and implement a Fibre Channel network can be a considerable investment. That being said, SANs are really the only way to provide very fast data access for a large number of users that also can scale to supporting hundreds of users at the same time.

Differences Between NAS and SAN:

2)  Data processing. The two storage architectures process data differently: NAS processes file-based data and SAN processes block data. The story is not quite as straightforward as that of course: NAS may operate with a global namespace, and SANs have access to a specialized SAN file system. A global namespace aggregates multiple NAS file systems to present a consolidated view. SAN file systems enable servers to share files. Within the SAN architecture, each server maintains a dedicated, non-shared LUN. SAN file systems allow servers to safely share data by providing file-level access to servers on the same LUN.

3)  Protocols. NAS connects directly to an Ethernet network via a cable into an Ethernet switch. NAS can use several protocols to connect with servers including NFS, SMB/CIFS, and HTTP. On the SAN side, servers communicate with SAN disk drive devices using the SCSI protocol. The network is formed using SAS/SATA fabrics, or mapping layers to other protocols such as Fibre Channel Protocol (FCP) that maps SCSI over Fibre Channel, or iSCSI that maps SCSI over TCP/IP.

4)  Performance. SANs are the higher performers for environments that need high-speed traffic such as high transaction databases and ecommerce websites. NAS generally has lower throughput and higher latency because of its slower file system layer, but high-speed networks can make up for performance losses within NAS.

5)  Scalability. Entry level and NAS devices are not highly scalable, but high-end NAS systems scale to petabytes using clusters or scale-out nodes. In contrast, scalability is a major driver for purchasing a SAN. Its network architecture enables admins to scale performance and capacity in scale-up or scale-out configurations.

6)  Price. Although a high-end NAS will cost more than an entry-level SAN, in general NAS is less expensive to purchase and maintain. NAS devices are considered appliances and have fewer hardware and software management components than a storage area network. Administrative costs also figure into the equation. SANs are more complex to manage with FC SANs on top of the complexity heap. A rule of thumb is to figure 10 to 20 times the purchase cost as an annual maintenance calculation.

7)  Ease of management. In a one-to-one comparison, NAS wins the ease of management contest. The device easily plugs into the LAN and offers a simplified management interface. SANs require more administration time than the NAS device. Deployment often requires making physical changes to the data center, and ongoing management typically requires specialized admins. The exception to the SAN-is-harder argument is multiple NAS devices that do not share a common management console.

NAS and SAN Use Cases:

NAS and SAN serve different needs and use cases. Understand what you need and where you need it.

NAS: When you need to consolidate, centralize, and share.

· File storage and sharing. This is NAS major use case in mid-sized, SMB, and enterprise remote offices. A single NAS device allows IT to consolidate multiple file servers for simplicity, ease of management, and space and energy savings.

· Virtualization. Not everyone is sold on using NAS for virtualization networks, but the usage case is growing and VMware and Hyper-V both support their datastores on NAS. This is a popular choice for new or small virtualization environments when the business does not already own a SAN.

SAN: When you need to accelerate, scale, and protect.

·  Fast backup. Server operating systems view the SAN as attached storage, which enables fast backup to the SAN. Backup traffic does not travel over the LAN since the server is backing up directly to the SAN. This makes for faster backup without increasing the load on the Ethernet network.

The benefits of SAN are motivating some vendors to offer SAN-like products at lower cost chiefly by avoiding the high expense of Fibre Channel networking. This has resulted in a partial convergence of NAS vs SAN approaches to network storage at a lower cost than purely SAN.

One example is Fibre Channel over Ethernet (FCoE), which supports block level transfers over standard LAN at speeds of 10GB/sec+. For smaller deployments, iSCSI is even less expensive, allowing SCSI commands to be sent inside of IP packets on a LAN. Both of these approaches avoid expensive Fibre Channel completely, resulting in slower, but less expensive ways to get the block level access and other benefits of a SAN.

Unified (or multi-protocol) SAN/NAS combines file and block storage into a single storage system. These unified systems support up to four protocols. The storage controllers allocate physical storage for NAS vs SAN processing.

They are popular for mid-range enterprises who need both SAN and NAS, but lack data center space and specialized admins for separate systems. Converged SAN/NAS are a much smaller part of the market than distinct deployments but show steady growth.

Continue reading about Storage Solutions or